A Tribute to my Dad 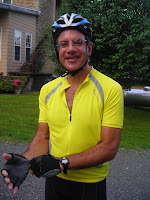 Most young adults are desperately seeking a way to distinguish themselves from their parents and their home. It is a time of learning to pay bills, to cook gourmet meals and to operate within the working world. It is not the time to get on the back of your dad’s bike, wear matching outfits and spend over 2 weeks on the road sharing motel rooms.

I still remember a distinct May afternoon when I was three years old. I was in a child’s seat on the back of my dad’s red bike. Having insisted on bringing my dog-shaped purse along for the ride, I dangled it from above with pride. Then suddenly, the bike screeched to a halt and my dad released a stern frustrated grunt. My little arm was yanked downward. I had clearly upset my dad, and even worse my doggy purse let out a desperate yelp as the derailleur ate it. The tears began to flow. My dad calmly explained that it was fine, but next time I needed to be careful not to dangle things off the bike. I didn’t bring a purse on this ride. I didn’t even bring a Barbie. And the mechanical issues we had were not caused by my carelessness.

I am twenty-three years old and I just rode a tandem bicycle from Mobile, AL to Cincinnati, OH (1200 miles) with my dad. My dad is not a “normal dad.” We watched musicals together. He tucked me in every night making sure to adhere to my specific rituals including animating my stuffed bear. After spending years helping out with my brothers’ baseball teams, he became the president of the Queen City Figure Skating Club to support me. He did all of this while working insane hours to fight for the civil rights of marginalized groups. In particular, he has focused on using civil rights laws to advocate for criminal justice reform, which led him to found the Ohio Justice and Policy Center directed by the dynamic David Singleton and for which our bike ride has been raising funds.

When I told my friends that I was planning to go on this adventure the standard response went something like this, "Wow, that is so cool! I love my dad, but I could never spend that much time so close to him." The thing is, the terror of being with my dad for over two weeks straight had not even crossed my mind. I had considered the butt pain, getting hit by a car, monotony of bike riding as possible drawbacks to the plan, but not spending time with my dad. I have now spent 17 days on the same machine as my dad, my head buried in his back, our feet synchronized, laughing at the same odd occurrences and I would do it all again…tomorrow.

When I was three, my dad carried me. Now, at twenty-three, we carry each other. Riding through small town America, we got various reactions to our bike. One common male reaction was this, “Oh, so she can just sit on the back and you have to do all the work!” It does not work that way. We were a team. We are a team. One day in particular, my dad’s legs were feeling tired. He wrote in this blog of that experience:
"Who was doing a power surge back there? How did we get up that hill? Who was calling out
those words of encouragement? Who was that gentle person checking in on me asking if I
was OK? Jessica. Daughter. Energized and in charge. I knew enough to get us started on this
trip. But she is getting it done…My back hurts. I may be a little slow as we start back on the
road tomorrow. But that’s OK, Jessica is with me."
There were other days when I was not quite feeling it. My dad would lightly nudge me with a simple, “Give me some legs girl!” With that I was back, giving it all I had.
Oddly enough, after spending two and a half weeks practically glued to my dad’s side I feel more empowered and independent than ever. My dad was my partner, but each of us grew on our own. I have discovered a deep love for pedaling, for being outside, for silence. We gave each other space to process this experience in our own way while also celebrating each other. Like all kids, I thought I had superman for a dad. This trip has shown me that he is human and that is even more impressive. I can trust him, but I also can doubt him, speak up and he will listen. Thank you, dad, for letting me grow up, but never letting me go. I will never be too old to ride on the back of your bike. 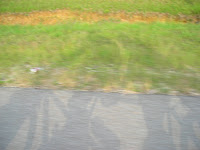