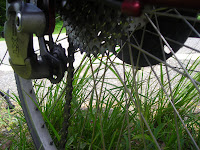 The soft sound of the wind is broken only by the many robins who call to each other from the woods on each side of the road. That would be the dense woods; the deep woods - the woods that we will call home while stay here at roadside with a broken chain. We have no engine on a tandem. Only our legs. But the big bike goes nowhere without a chain. And ours just busted as we powered up a hill in the middle of nowhere. The chain tool is at home. I just tried a pliers. No luck. A chain tool is one of those special tools about which cyclists say, “Don’t leave home without it.” Oh well. Jessica just calculated the time by which we must leave if we are to reach the next town with a place to stay. We do have a tent but prefer not to go that route. So we wait. For what? For Keith. Who’s Keith? The young man at the bike shop back in Mobile. The boss let him run a private errand and we have negotiated the purchase of a bike tool, a roadside repair and the purchase of a new back tire as I see we now have a bubble emerging on the back tire. At least we have cell phone coverage here! So all things are possible – and we will be rolling soon enough.


After extended rains we are finally getting some better weather. And we are leaving the extended Mobile suburban scene. Less traffic. More nature. We saw road kill several armadillo yesterday and today saw turtles basking on logs in the sun and several snakes along the road. This is beautiful country.

We started listening to “Bound from Canaan” on the IPod. This is a book about the Underground Railroad. We learned about Isaac Hopper. He was a Quaker and was active in the fight against slavery in the late 1700’s. His first choice was to use the law. That sounded familiar. He used the law to challenge what was then the status quo. Slaves were everywhere. North and South. But the Quakers knew this was wrong. No matter that the majority community accepted slavery as a normal aspect of everyday life. He and a few others set about to tell the majority community that slavery was intolerable. We are learning about court battles and extraordinary efforts to free people when those cases were lost. But on some cases Hopper prevailed and precedent moved ahead toward more arguments to expand liberty. Read about OJPC. Quietly OJPC is challenging the status quo. A prison population that is 50% black is intolerable. A prison population that exceeds 55,000 in this state is intolerable. Treating as criminal many acts that are driven by drug dependence is intolerable. Sweeping into the criminal system drug addicts and mentally ill folks and then doing little to help them conquer their underlying problem is intolerable. Hopper is an inspiration. David Singleton is too. But the chain is still broken…
Posted by Al Gerhardstein (Grandpal) at 10:02 AM