Lessons learned while hitchiking with a tandem

Did I tell you about the bulges on the back tire? A steady leak was located at the site of one of those bulges this morning. These bulges had been making me nervous the whole trip. So I installed the backup tire the man from the Mobile bike shop brought during our chain event. And off we went. For a while. I realized down the road that the tire was rubbing on the fork. The tire was too wide! I had looked up bike shops on the internet and there was a shop in Columbus, MS. We started hitchhiking and soon Johnny picked us up with his truck. We learned about his 12 siblings, three wives, three children (ages 31, 29 and 2). Johnny told us that crime and drugs and drinking are all rampant in Mississippi because no one is allowed to hit their kids anymore. He saw no hope for our youth. 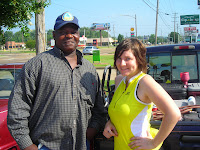 As we got in cell phone range we called the bike shop. Out of business. Johnny left us at a gas station. I decided to switch the front and back tires as the front fork was a bit wider. Unfortunately, not wide enough. I reviewed the problem with a firefighter and showed him if I could just have the front wheel ride a bit lower in the frame we would be set. I was trying a duct tape plug but wanted something more solid. He returned a few minutes later with short pieces of sheet metal he had cut. They fit perfectly and the bike was usable again but without a front brake. 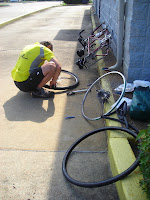 We made it to a spot where we could intersect Dave and Nick (other cyclists whom Jessica will blog about later) who had retrieved our bulging tire from the motel in Aliceville…as I thought it may be salvageable. They arrived. They also had a spare tire our size. Forget salvaging that tire with the bulges. They graciously shared their spare with us. Thank you Dave and Nick! Their tire works perfectly. But now the tire I had installed on the back seems to be developing bulges and may have a slow leak….Yikes! This bike is definitely not behaving. I know what Johnny would say. Of course bikes would mind us if we spanked them.
Posted by Al Gerhardstein (Grandpal) at 7:34 PM