(Delayed posting...)
There are several messages the south has given me. One thing I definitely know is that Jesus loves me. Several signs on telephone poles and churches have assured me of that. This morning a woman gave me a daily devotional over breakfast. I have learned not to mess with the devil because: 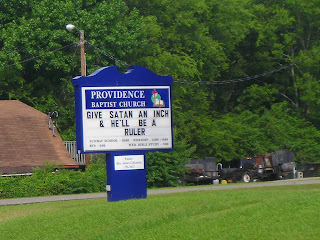 It is no exaggeration when I say that we have seen more churches than houses, especially when riding through Alabama. Naturally, I was compelled to attend one after passing so many. Thus our first Sunday we stopped into a small black Baptist church on the side of a county highway in smalltown, Alabama.
We arrived an hour late, but from what we could tell they had just been warming up. We popped in the back door, sweaty and in spandex. After a quizzical look from the ladies in white (the greeters), we explained we wanted to attend. They welcomed us in with smiles and encouraged us to go sit in the front. Feeling a bit out of place, we found our seats toward the rear.
Pastor Roberts was a small man. He walked with a confident uneasiness. His robes hung off his shoulders making him appear even more feeble than he was. While he was clearly the leader of the congregation, everyone pitched in to make the worship flow. When he thought it was time to do the offertory, it was really time for announcements. No problem. A man in the side pew simply hollered out, "wait, who's doing announcements?" A little lady in the choir came forward with a stack of papers and read all the church mail. It seems that it's Baptist Church homecoming season, and everyone has been invited to attend all the churches in the region. Worship is a full time job in June. The whole event seemed more like an informal family gathering than an orchestrated church service.
25 heads strong, they were not the best singers. The pastor was not the most charismatic. But there was soul in that small building. We witnessed the pep talk of the impoverished. Any intellectual would have quickly been deterred if she were listening closely to the words. But, this gathering was not about logic. It was about feeling. Love. God. Holding each other up. Community. I've been to lots of churches. I've studied religion. But what unfolded in the hour and a half we sat there was unlike any service I have ever attended. Any spoken words quickly transitioned into songs. People could not hold back harmonies, melodies and croons. The pastors sermon was actually a 30 minute Blues song. He sang us the book of Job. He sang us the troubles of the congregants. He sang to us of greed and contradictions.

"Ain't god alright...mmmm. If you want a mother to move... ain't god alright...yeeaa... having trouble sleeping oh yea...ain't god alright...ooohhh...you'll take any kind of job...mmmm.... ain't god alright.... ain't no jobs father... ain't god alright....mmmyea...."*
The community swelled as he sang. It was clear this was their lullaby. When he finished his "sermon", he giggled and apologized saying, "you know I always have to sing part of my song." I got the feeling this song is one that never ends. It was clear that my dad and I were not from this community. We did not know the songs and the stories. But that afternoon, we held hands with them. We introduced ourselves to inquisitive eyes. We belonged. As Pastor Roberts struggled to bring the service to a close, he blessed his church family and he gave us a special blessing as well. And just when we thought it was over, a little woman sitting off to the side stood up.
"I just have to share my song!" She said. She then proceeded to burst out with a strong declaration of sorrow and hope. The room pulsated. The beat carried us for the rest of the day. I struggled sitting in the pews. I felt upset and conflicted as everyone agreed when the pastor exclaimed that they had no power, that God was in charge. But, it was clear this was their power. This room. These songs. These clasped hands. As we rode off, everyone told us to come back again with a mutual understanding that this would probably be the last time we interacted. We thanked them for welcoming us and pedaled on humming their songs,

Riding down the country roads of Alabama.... mmmm...ain't god alright. 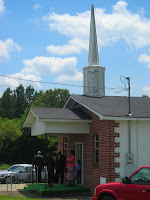 *I have actual audio clips from the church... but can't figure out how to put them on the blog-> please comment if you know how to do this
Posted by Jessica at 9:01 PM